Why Future Space Travel could be more Romulan than Federation

In the fictional Star Trek universe most space-faring civilizations use matter-antimatter annihilation to power their spacecrafts. For 2020 A.D. Earth that is literally a tall order because antimatter is insanely expensive. In a 1999 NASA blog post the price for a single gram of antimatter was stated to be $62.5 trillion dollars. Adjusting for inflation that makes one gram of antimatter currently worth over $95.9 trillion.

But what's even $100 trillion when your society is post-scarcity and doesn't use money anymore? Antimatter fuel has some downsides though even for a cashless utopia. Antimatter is difficult to store long-term and a vacuum environment can still have the occasionally stray atom that will waste fractions of the fuel supply. Antimatter is also very rare in nature so mining antimatter fuel is out of the question.

I was thinking about this recently after Certifiably Ingame posted a video on YouTube about Romulan spacecrafts being powered by a "artificial quantum singularity". This reminded me of another YouTube video by Isaac Arthur about using a black hole for propulsion.

As bizarre as it seems black holes do generate energy in the form of Hawking radiation which can be used to power an interstellar spaceship. Creating a black hole for power generation is more realistic than discovering dilithium crystals. According to an official CERN faq page about the possibility of the Large Hadron Collider creating a black hole:

The LHC will not generate black holes in the cosmological sense. However, some theories suggest that the formation of tiny 'quantum' black holes may be possible. The observation of such an event would be thrilling in terms of our understanding of the Universe; and would be perfectly safe...

The use of a huge particle accelerator isn't the only way to create an artificial black hole. Many sources on the internet that discuss using black holes for spaceship propulsion refer to a "Kugelblitz" which is a type of theoretical event horizon created with photons of energy. According to a Big Think article a Kugelblitz the size of one attometer (roughly the size of an electron) could generate 129 petawatts of power and accelerate a spacecraft to a maximum 72% the speed of light.

The YouTube video below shows how potentially significant tapping the energy of a natural black hole could be if earthlings could exploit the Penrose process. All Earth needs to do is develop the technology to get roughly the amount of energy Earth's sun generates in 0.1 seconds and concentrate it to a point in space one quintillionth of a meter and earthlings could theoretically propel a spaceship to a natural black hole to build a colony with virtually no more energy scarcity.

That's great but the same attometer Kugelblitz described in the Big Think post has a lifespan of five years before it evaporates all of its Hawking radiation. Assuming the maximum top speed of 72% the speed of light and plugging it into a time dilation calculator for a trip to Proxima Centari 4.22 light-years away from Earth; the journey would take almost 4.07 years. Clearly past the point of no return and far short of the closest known black holes to Earth. 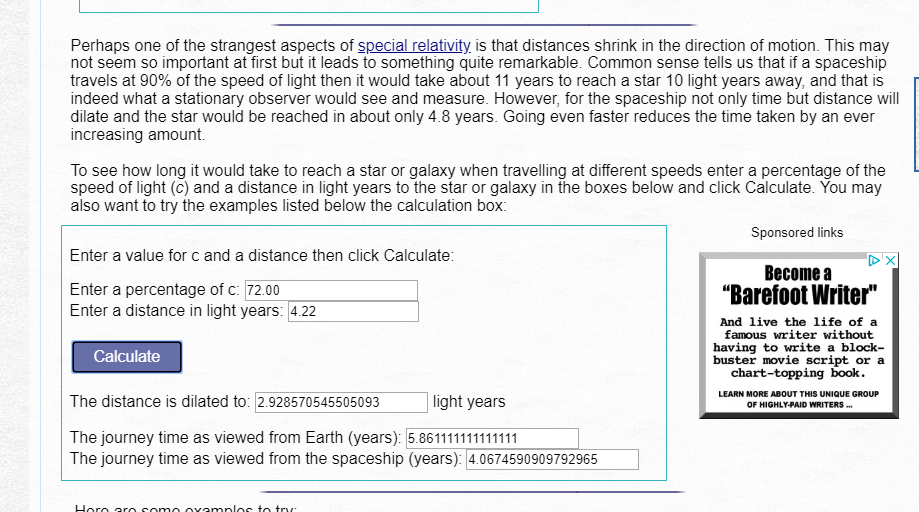 There may be hope though. Recent news reports describe a new theory that a primordial black hole the size of a bowling ball might be beyond the orbit of Neptune. If true that primordial black hole is hours away from Earth traveling at 72% the speed of light. Roughly a decade of travel using conventional rocket propulsion.