Watching this YouTube video below reminded me of something I sometimes think about: Looking for a signal from extraterrestrial life is one thing. Once it is found and verified what then really happens? Do we cheer or do we sue in court?

I used to run the SETI@home program even before mining Gridcoins was possible. I started using SETI@home back in the late 1990s after I heard about it on Coast to Coast AM with Art Bell. I don't run SETI@home anymore because nowadays I use more hardware intense software and I try to not drive my computers to an early death.

I haven't done any research yet on what, if anything, the SETI Institute has said about the intellectual property issues if an alien signal were to be identified and confirmed. The SETI Institute is a not-for-profit research organization but that doesn't mean they aren't allowed to copyright and license works they create.

One of the most famous candidate detections is the 1977 "Wow!" signal. In the Wikimedia Commons there is a plot of that signal's strength versus time (Wow signal profile.png) under a CC BY-SA 3.0 Creative Commons license. 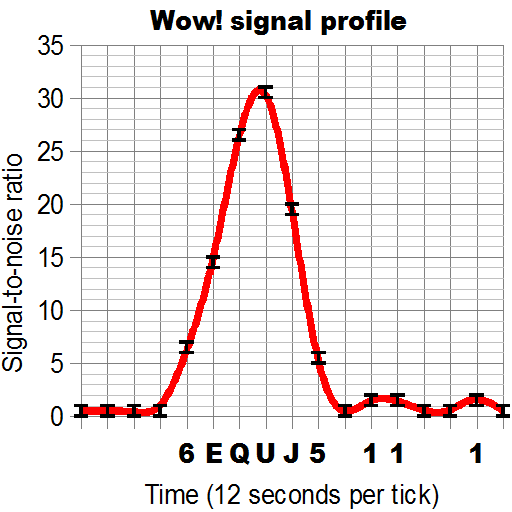 Maybe SETI Institute will put the first verified alien signal ever detected in the public domain. Maybe SETI won't because someone else will beat them to history's greatest discovery. Outer space covers all 360 degrees of the Earth so it's a search anybody with a minimum amount of hardware and software can participate in. I made a Steemhunt post last year about open source radio telescopes.

If I put time, money and energy into the hobby of optical astronomy and I am lucky enough to be the first discoverer to identify a new asteroid I would get up to 10 years to suggest and submit a name for the asteroid. As long as I go by the naming guidelines my suggested name should have a good chance of getting approved. I wouldn't have any legal claim of owning the asteroid's minerals or materials but I would at least have the privilege of suggesting the name.

But if I put the time, money and energy into the hobby of radio astronomy then what rights and/or privileges are there? Based on the YouTube video posted above it seems under copyright law I have no right to ownership on any contents an alien broadcast might contain.

The video doesn't go into patent law. Maybe if the aliens send schematics a radio astronomer might be able to make a legal claim there. If so, that would most likely be quite a gold mine to reverse engineer. Something extraterrestrial in origin that is complex would probably consist of a thousand different things that could each be patented. New technology would probably have to be invented to create the technology to construct and fabricate an alien device.

If we go by the "monkey selfie copyright dispute" mentioned in the YouTube video copyright law only protects human authorship. But comparing aliens from another planet to Earth animals seems wrong. An alien intelligent enough to modulate electromagnetic waves to encode a signal with data is clearly intelligent enough to be considered an author. Maybe a simple "hello" or a series of prime numbers isn't substantial enough for copyright protection but the first alien signal could be something creative like snake jazz.

Maybe whoever first detects an alien radio signal will live in a legal jurisdiction that allows for a reasonable attempt to be made to contact the author before making a legal claim. Maybe China will put a radio dish on the back of the moon and after detecting an extraterrestrial broadcast will do whatever it likes with that just like China does with every other copyright. I don't know.

There is also the reverse legal issue. I am a licensed amateur radio operator (callsign W3DTV). Most of the time I'll use wavelengths that bounce off the ionosphere. It would be possible if I got better equipment to moonbounce or meteor scatter. Maybe my aim would be off and my signal would fly off into space. Under U.S. law copyright is automatic. It is not required that I do the "copyright 2020 blah, blah all rights you know the rest" but doing that helps to prevent someone else from claiming innocent infringement as a defense.

If I am recording on my computer as I aim for the moon and miss does my amateur radio broadcast received by an alien 300 light years away still have copyright protection? I don't know. I honestly don't think that matters. The signal took 300 years to get there at the speed of light and under current law that means it would have lapsed into the public domain by then.

It's not like I can go to some alien planet and demand they respect copyright law. Alien understanding of intellectual property could be drastically different or non-existent. Maybe just like the idea of a country's territorial waters being defined by how far they could fire armillary physics can define the sphere of influence a planet can have on intellectual property. A general rule of thumb could be a copyright becomes public domain after one hundred years. Since electromagnetic waves travel at the speed of light a 100 light year big bubble surrounds Earth. Any aliens broadcasting within 100 light years can claim copyright. Any aliens receiving Earth broadcasts within a 100 year radius of Earth have to respect our copyright laws. Or else vague consequences.

Maybe Earth has the only intelligent life in the universe and we're alone. We've been listening for decades and so far nothing. Maybe we're the only ones watching I Love Lucy. Maybe after several decades of not getting any alien broadcasts we subconsciously decided that it doesn't matter what kind of quality our TV shows should be as a first impression to anyone out there because there probably isn't anyone out there. We're just making entertaining media for ourselves.