O.K. I established pretty well in a previous post that the Little Prince (voiced by Taiki Matsuno, Julie Dees, Katie Leigh) is really a hidden Time Lord in anime. There are at least two obvious questions if that is true. I thought maybe someone like @ahmadmangazap might have asked those questions in a reply but I'll pose them:

First, just because the Doctor in Doctor Who has a companion doesn't mean every Time Lord (or Time Lady) has one. The Master hardly ever has one. The Monk didn't have one in "The Time Meddler". Little Prince is a Time Lord that travels alone.

Swifty (voiced by Hiroshi Masuoka, Hal Smith) might have become a companion of Little Prince except that bird was cahooting with the hidden villain. That's right folks. Rose Girl (voiced by Yoshiko Matsuo, Janet Waldo) is the Dalek to Little Prince's the Doctor. She may look pretty but she is a Lovecraftian monster of the highest order. 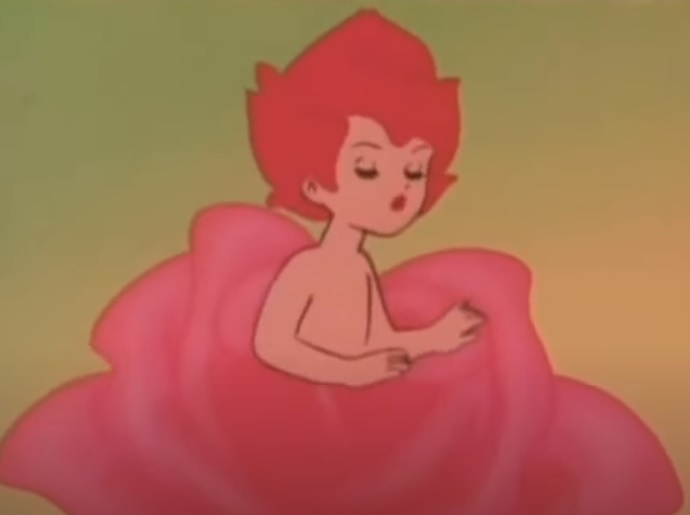 Image Source: The Adventures of the Little Prince (TV series)

Let's examine some of the story timeline for the pilot episode of The Adventures of the Little Prince. Little Prince is minding his own business and being the boy equivalent of a crazy cat lady minus the cats. A strong wind blows. The Little Prince himself remarks that the wind is too big for such a small planet. That atypical wind delivers what Little Prince believes is a flower seed. It's really not a flower seed and we'll get to that soon.

Little Prince plants the "seed" in the ground and while he's doing that he states out loud that he would like the flower that results to be red.

Almost immediately after putting the "seed" in the ground Swifty the bird whistles and gets Little Prince's attention so he can meet Swifty for the first time. We know that the "seed" "grows" to become Rose Girl. Effectively Little prince has been introduced through the story to two different beings by this point in time. The pilot episode repeatedly uses details to emphasize how small Little Prince's planet is. Consider this dear reader: What are the chances that such a small planet drifting in space would have two new creatures show up in such a short window of time? Pretty small probability, right? What if those two creatures were working together somehow? Then Little Prince's encounters with the two new creatures weren't random.

Swifty starts selling Little Prince immediately on the idea of leaving B-612 to travel. It's as if Swifty wanted Little Prince gone so he wouldn't be present if something happened. Swifty is also rather vague about his origins. Maybe Swifty doesn't want anyone to go to where Swifty comes from if it is discovered that there is an evil that needs to be defeated at its source?

The next morning Swifty seems to brush off the new growing plant as a "weed" and continued to try to convince Little Prince that he should go off traveling. In response Little Prince states out loud that the plant may grow into a rose bush and he needs to take care of it. Previously Little Prince wished it would be red in color and now he's stating out loud a desire for a rose bush.

Guess what? The plant from the "seed" turned out to be a kind of rose. It wasn't precisely the color Little Prince desired. It was a pinkish tint between red and magenta. But wouldn't that be part of the plan? Two creatures show up and the flower was the desired type. Also being red would have been far too many coincidences lining up to reveal a plot was brewing.

Where am I going with this? In the attached YouTube video of the pilot episode skip to the 12:49 point:

Rose Girl: I hope I didn't make a mistake in coming here. I could have grown on any planet I wished, you know? There was one that was all covered with lovely trees and babbling streams and I really thought of going there; but...
Little Prince: You couldn't have seen other worlds! You were just born from a seed right here!

At this point I believe Rose Girl realized she said more than she should have and had to quickly change the topic. Rose Girl didn't claim to have "seen" those worlds. Being a "seed" doesn't mean she couldn't have observed geologic features. Blind people can make observations using other senses than sight. As a "seed" Rose Girl was sensing the features of the worlds she passed by. Maybe by radar or by bouncing some other part of the electromagnetic spectrum off the worlds. For all I know it was sonar since there seems to be air in space that Swifty can breathe.

Let me make this simple in terms of Marvel Comics. Rose Girl is like Galactus and Swifty the bird is her Herald.

As a "seed" and fully formed Rose Girl is what scientists would refer to as a von Neumann probe. Rose Girl is really a self-replicating machine. She sailed through space as a "seed" scanning planets she passed by. Whatever her needs are B-612 had them so she infiltrated Little Prince's planet. While monitoring the environment the "seed" detected Little Prince's desires for what it should become and programmed it's structure accordingly. Perhaps while what was acting as pedals were opening Rose Girl released pheromones for good measure to get in Little Prince's good graces as her roots are slowly taking the raw material under the ground and converting it into new seeds that will eventually be released.

So why is Swifty trying to get Little Prince to leave for adventure? Obviously as Rose Girl is slowly converting the planet into self-replicating seeds sinkholes will form and the planet will get slightly warmer due to the waste heat from the nanotechnology conversion process. Swifty's offer to come by and "check to make sure everything is fine" while Little Prince is away is really Swifty reporting for duty and covering up the evidence as it appears. Does it seem a little warmer Little Prince? Well, you've been away on a cooler planet so it just seems warmer here. Don't think about it. Swifty's most important job is to put off as long as possible Little Prince's eventual epiphany that evil fell upon his world. In the end Little prince will have to go to battle against the creatures that invaded his world and pretended to be his friend.

Swifty's job will eventually be done if Little Prince doesn't get wise. Rose Girl worries about Little Prince never coming back. It's fine that Little Prince is gone while the two alien invaders collude in the destruction of his world. In the end Rose Girl's main objective is to create as many new copies of her original seed as possible. Little Prince is made up of carbon, calcium, iron and all sorts of other raw materials. When the final feast of B-612 occurs Rose Girl wants all of the planet's mass there, Little Prince included.