It's November 17, 1990. It's just another saturday morning watching television. On this morning though CBS is airing the final episode of Pee-wee's Playhouse. Let's review how that went.

The episode starts with the theme song sung by Cyndi Lauper (credited as Ellen Shaw). After five seasons if you haven't figured out yet things are wacky at Pee-wee's Playhouse then the puppet Randy must have practiced brain surgery on you without a license. Classic Randy! 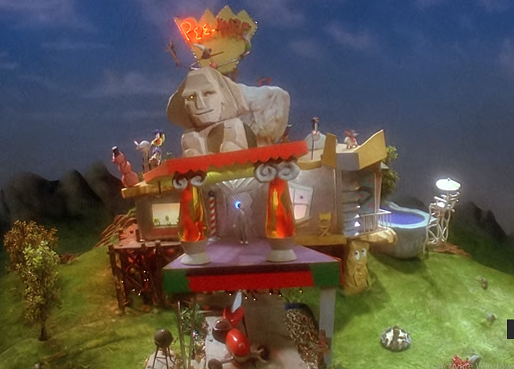 Magic Screen shows one of those clips that looks like a cheap public domain stock film from the 1950s. That's O.K. because this final episode of the series is a clip show. Pretty much everyone has given up on the show and it is running on fumes.

Miss Yvonne (Lynne Marie Stewart) comes dancing into the playhouse and continues her dance. This is her last appearance on the series so she is desperately hoping for another acting gig after this and the Devil stood her up at the crossroads the night before. The puppet Pterri flirts with Miss Yvonne because he's about to be stuffed in a storage crate of Hell by the Devil and it's his last chance to try to score with the woman who knows how to play everything but hard to get.

Miss Yvonne asks each of the puppets where Pee-wee (Paul Reubens) is. Conky 2000, the Five Nights at Freddy's reject robot, tells Miss Yvonne that Pee-wee left a tape recording for her. The message is Pee-wee stating that he is out hunting aluminum cans and he'll be back later. Knowing Pee-wee Herman this means he is literally walking down the highway with a gun shooting cans. This is not the day to drive a silver colored car. The tape self-destructs after being played so it can't be seized by law enforcement later while investigating why silver cars in the area were being sprayed with bullets.

The puppet flowers ask Miss Yvonne what the sign in the window says. Miss Yvonne pulls out a "For Sale" sign. This sign shocks Miss Yvonne. How could Pee-wee sell one of the last remaining hippie communes? 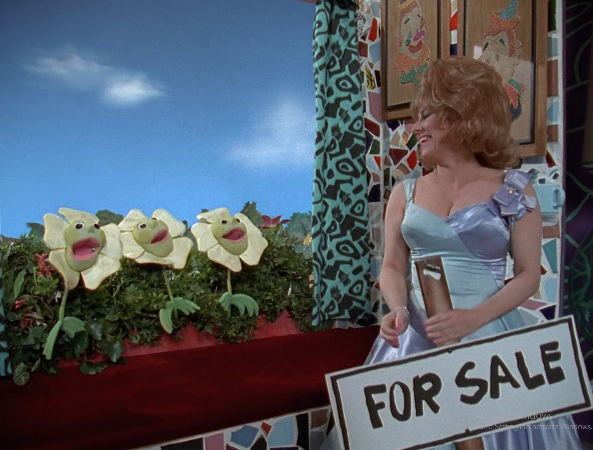 This is Magic Screen's cue to start showing the clips that will kill time until Pee-wee Herman finally decides to show up. The first clip, I mean "memory", was when Reba had imaginary breakfast at the playhouse. Technically that was when Reba was magically teleported against her will by Jambi but "Remember when we kidnapped Reba on her day off from work?" isn't a good line for a kids' show.

The clips continue until Conky 2000 remembers when Pee-wee married his cup of fruit salad during a slumber party at the end of the second season.

Miss Yvonne declares that Pee-wee can't sell the playhouse. She's spent too much of her life there and as a woman over the age of 40 all she can do now is double down on her bad life choices.

Pee-wee finally shows up. Miss Yvonne tells Pee-wee that he can't sell the playhouse/commune because it belongs to everyone. That was their agreement after the IRS denied their cult's request for tax-exemption status as a church. 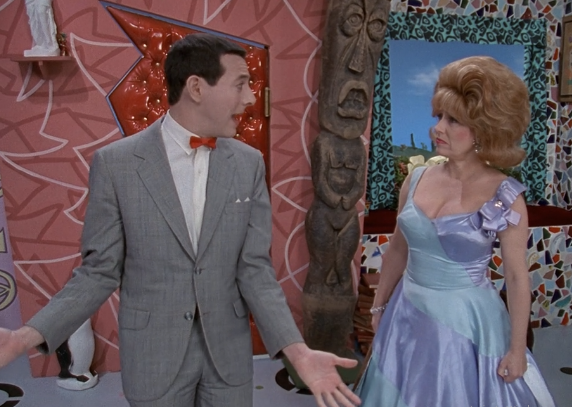 Pee-wee looks confused. Miss Yvonne asks why he's selling the playhouse and shows him the "For Sale" sign. Pee-wee asks where the other part of the sign is. He excuses himself and goes outside returning a few moments later with a "lemonade" sign. Pee-wee explains the "lemonade" part of the sign must have fallen off and everyone is relieved that Pee-wee isn't selling the playhouse.

Pee-wee asks if anybody wants a glass of lemonade. After everyone says yes Pee-wee goes to get on his bike. When Miss Yvonne asks where Pee-wee is going he says he is going to get some lemons. Pee-wee then promises that the playhouse will always be there forever. Pee-wee Herman then rides away and the series ends.

Pee-wee is supposedly selling lemonade but doesn't have any lemons. He was also supposedly hunting aluminum cans but we don't see any evidence of that. Did Pee-wee just go outside and quickly make a lemonade sign like I used to write school essays at the last minute?

Pee-wee Herman was basically the dad who went out for cigarettes and never came back. Or maybe he mistook a silver car for an aluminum can and went on the lam from the cops. I guess we'll never know.