Let's go to my list: Adventures of Milkman. Check. Bananaman. Check. Next up is...Oh, yeah. That kid. Inside-Out Boy (voiced by: I can't find a reference to the voice actor of this character).

Whenever an intro has the line "Where are my pants?" you know you've been warned about what is coming next. Just so you don't think about that no pants thing the intro tries to confuse you with the contradictions "...incredible powers beyond those of any superhero" and "...He couldn't fly or even leap tall buildings". Way to go Nickelodeon!

Maybe it is weird but in my mind I associate Inside-Out Boy with Clarissa Explains It All because that tended to be when I saw this, according to IMDB, "commercial series". What demographic exactly was Nickelodeon targeting? Little psychopaths who will become serial killers and/or necrophiliacs?

In 2020 any kid who gets turned inside out swinging over the bar on a playground would lawyer up. But this was the 1990s. Kids assumed the risk, right? There was no 24/7 news cycle as we know it now so very few adults were aware of the fact that a kid was going day by day looking like an autonomous limited edition Halloween Operation board game. It's not like that could ever become common knowledge back then. 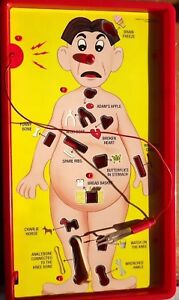 WHERE THE F*** ARE ALL THE SCIENTISTS WHO NEED TO BE STUDYING THIS???

I don't know. If his body was flipped inside out then where's the bottom hypodermis tissue that should be in the front? Was it all shoved behind him? What is holding all those organs in? Biology isn't my strongest science but I am virtually certain viruses and bacteria infection must be an ongoing issue. Am I missing something?

Seriously. Somebody needs to be studying this. Even if it's a liberal arts major claiming this series is a sociopolitical commentary on racial discrimination.

There is one thing I do know: You can't make a claymation abomination cool by referring to him as "I.O.B.". That kind of image rehabilitation needs more than a simple acronym.

Make no mistake. Inside-Out Boy is no superhero. When you go around scaring adults like that someone is bound to die. Somebody with an underlying cardiac problem has little hope against that kind of shock. Wear a jumpsuit. Save a life.