A mere genius might settle for simply 3d printing a model of George Pal's The Time Machine prop. The truly great aren't content with vicarious adventures in space and time. They roll up their sleeves, go to the basement and MacGyver their own temporal transportation system.

Then the government steps in and the fight for the freedom to be an inventor occurs. Does that make "Future Boy" a Libertarian's favorite episode of Quantum Leap? 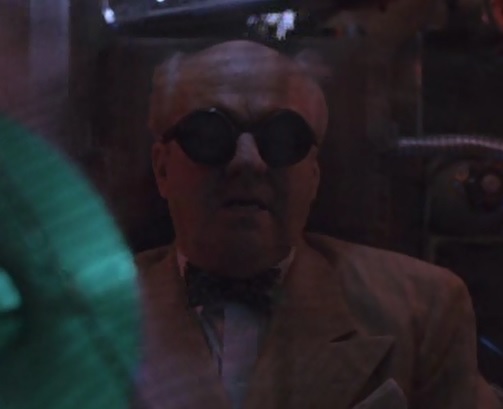 Moe Stein (Richard Herd) is an actor on a 1950s science fiction TV show as a day job. Moe Stein's real passion is building a time machine in his basement based on his "string theory" of time. The purpose of Moe's attempts to time travel is to rewrite the last 30 years of his acting career and to be a better father. Perfectly reasonable.

Many, including Stein's adult daughter, don't understand and appreciate Moe Stein's brilliance. They would rather have Stein declared mentally incompetent and commit Moe Stein to a mental asylum to impede technological progress. Been there, done that.

In an original timeline Moe Stein died while trying to hop on a southbound freight train. I assume this was done by J. Edgar Hoover's F.B.I. goons killing Moe Stein and making it look like an accident to suppress time travel technology. It can't always be just suppressing free energy and evidence of alien visitation.

Due to the intervention of a more successful experimenter in time travel from the 1990s (Scott Bakula) Moe Stein's life was altered. Rather than becoming a martyr for scientific research Moe Stein went to live with his daughter and told tall tales of the future to the neighborhood kids. Society's loss.

What happened to Moe Stein's time machine prototype? As long as I am assuming the F.B.I. originally killed Moe Stein I am going to further assume a few unidentified men showed up and were more than happy to disassemble his invention and haul it away.