I know I haven't done a "Mad Scientist Monday" post for three weeks but you guys didn't request another one during that whole time. So who really dropped the elastomer sphere in this situation? Pretty sure it wasn't me and as I always say, "Just because you did it, doesn't mean you're guilty". I also sometimes quote myself because nobody else does.

When all else fails just collapse those troublesome or embarrassing universes. That's why today this post spotlights the brilliant character from the Sliders TV series named Dr. Oberon Geiger (played by actor Peter Jurasik). His skill sets include advance quantum theory, transdimensional physics and a propensity for collapsing parallel universes into each other. This latter skill was a necessity because Dr. Geiger was "unstuck" in space-time and without the necessary equipment he would randomly slide between parallel Earths. The character was only onscreen for three episodes of the series but had a remarkable story arc. 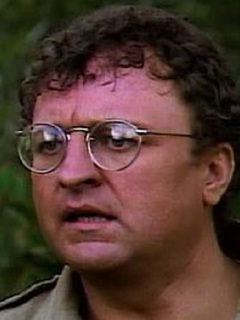 Being able to collapse parallel universes into each other is quite an accomplishment in itself but Dr. Geiger was able to manipulate his technical skill on a smaller than cosmological scale to suit his needs. He could affect the dimensional parameters around a city block or merge genetic material from an alternate reality version of a patient to cure disease. Basically, space and time were his to manipulate at will and could draw from any one of an infinite number of universes.