It's Valentine's Day so let's celebrate by focusing on a fictional technology that inadvertently neurohacked two Disney channel cartoon characters. Most of the time Kim Possible (voiced by Christy Carlson Romano) and Shego (voiced by Nicole Sullivan) were under the influence of the technology they were separately forced to be in love. In this post I am going to examine and overthink the moodulator technology featured in the Kim Possible episode "Emotion Sickness". Dr. Drakken (voiced by John DiMaggio) tries to steal an unrelated technology from a lab. Kim and Ron Stoppable (voiced by Will Friedle) show up to try to stop his burglary. Kim and Shego fight resulting in accidentally receiving mind control chips. Ron thinks he's playing a handheld video game when he's actually activating said mind control chips. Hilarity ensues.

As the Kim Possible Fandom wiki entry for moodulator states:

The Moodulator system was a controller device with synced wireless receiver chips created by Dr. Cyrus Bortel as a way to remotely capture and override a person's emotions when attached to their neck. He sought to sell it to the highest bidder.

The back of the moodulator chip isn't shown but as I'll explain further in this post I believe the reverse side is just as interesting as the front. 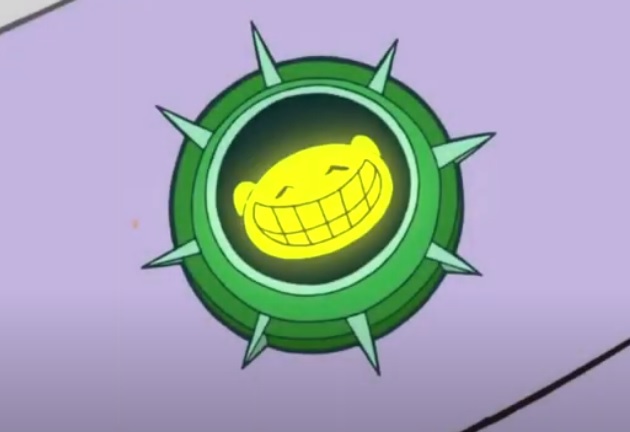 One thing to keep in mind when analyzing technology in the Kim Possible universe is that some technologies are more advanced than in our universe. For example nanoelectronics in the form of the nano tick. 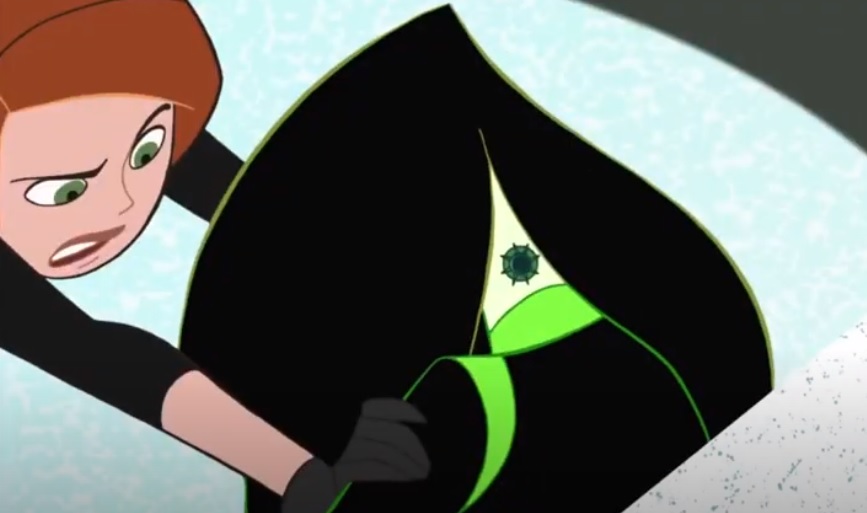 The type of display screen on the moodulator chip is rather difficult for me to deduce. Since the moodulator chip has to be low power as a wearable device my best guess is that it would be a type of RGB LED matrix display or possibly a LED-backlit LCD screen.

I assume since the moodulator system seems to be a single data signal broadcasted over a single radio channel the internal antenna is a smart antenna with signal processing capability. "Moodulator" is a play on the word modulator and the Kim Possible episode doesn't provide enough clues as to what method of RF modulation the moodulator remote control uses. Most likely the moodulator system's radio signal would be high up in the gigahertz range since the internal antenna is tiny enough to be in a chip I estimate being no bigger than 3 centimeters in diameter. The moodulator has good range since Shego was affected from a distance.

Since each mood that could be called up by the remote would be assigned a binary string for memory purposes the number of emotions a moodulator can induce should be considered. The Kim Possible Fandom wiki cited above lists the emotions demonstrated in the episode:

Doing a Google internet search shows that in the field of psychology the number of human emotions there are depends on the source. A University of California, Berkeley study puts the number of human emotions at 27. "Suspicious" doesn't seem to be one of the emotions on the U.C. Berkeley list but romance and sexual desire are listed as different emotions. Kim Possible and Shego were lovestruck so maybe the memory of the moodulator is limited and Dr. Bortel combined a few similar enough emotions as archetypes. Whatever the case two or three dozen emotions at most seems like a reasonable number.

I haven't speculated much about the remote which controls the moodulator chips because there isn't much to speculate about. Under the trivia section of the moodulator wiki entry it states:

Although of slightly different designs and colors, in the heat of action, Ron confused the Moodulator Controller and Kimmunicator, picking up the wrong one.

I think Kim Possible's twin brothers and Ron mistaking the moodulator controller for a handheld game is something of a red herring there. Wade (voiced by Tahj Mowry) made the Kimmunicator for Kim and Dr. Bortel made the moodulator system to auction it off. Neither was mass produced commercially so I think it's more probable that Wade and Dr. Bortel used similar project boxes for their respective inventions.