I originally wrote a post about this cartoon series two years ago but I think it's about time to take a second look at it since @steemitadventure is offering steem for "good" content posted to the new Comics Games Cartoon community. 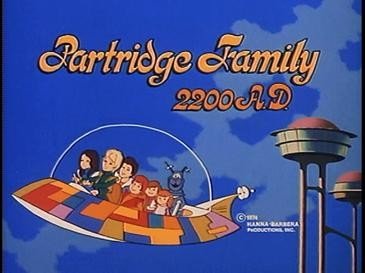 What happens when you take a live action music sitcom and mash it with a sci-fi premise trying to squeeze every last penny out of an animated saturday morning cartoon? You get Partridge Family 2200 A.D. Yeah, that really happened.

Some reading this may have seen The Partridge Family in syndication or even heard one of their songs played by an oldies radio station. It was an early 1970s show about five children and a widowed mother creating a career in music. In my headcanon the mother murdered her husband before the series began but that's for another post.

Now that we've got the original show explained we can get to the animated spin-off. A few months after The Partridge Family was canceled by the ABC Network in 1974 the CBS network began airing Partridge Family 2200 A.D. with the same five children and "widowed" mother along with a few space age secondary characters. Did the family somehow get sent to the future? Is this some weird coincidence with descendants from the live action series? Is this an alternate universe? Apparently nobody cared about establishing an origin story in the pilot episode so just go with it. Who cares about an origin story when a creepy kid can get a watch to make himself invisible so he can gaslight his sister and manipulate a girl into going to a dance with him?

Oh, right. That last part only makes sense after viewing the pilot episode. The rest of this post will go over that episode. If you want to follow along "Danny, the Invisible Man", along with many other currently popular kids' shows, is conveniently pirated on Dailymotion.

The pilot episode begins at the Plutonian Space Expo. Since new technology clearly isn't enough to get anyone to attend the expo is also featuring the Partridge Family performing their music and Freddie the Fantastic as a magic act.

Danny is frustrated that his crush Judy is more interested in Freddie. As Danny and his robotic dog Orbit walk through the expo they come to an exhibit selling Molex Energizers. A Molex gadget makes the user temporarily invisible while the user's molecules recharge. Danny tries to purchase one but the seller refuses because the Molex has too many unknown side effects on Earthlings; however, doctors are allowed to buy them. Danny walks away and literally a moment later returns in disguise as a stereotypical German doctor. I am pretty sure the guy knew what was going on and just wanted an excuse to sell his highly regulated device to an Earth kid for giggles. 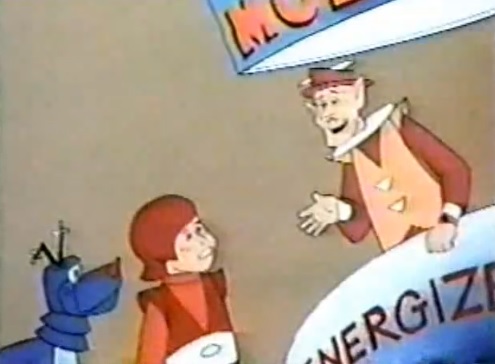 After returning to Earth Danny started his plan to get Freddie by performing a few "experiments". (Hey, Danny. The sleazy salesman is no longer around so who are you kidding about performing research?). First, Danny makes himself invisible and tricks his sister Laurie into thinking the robot dog is talking. The final experiment before enacting his plan is to sabotage his mom baking a cake.

I've seen this episode and I've seen the Sabrina the Teenage Witch episode "Magic Joel". Somebody is lying to me about what the first thing a boy with invisibility would do.

Impersonating a doctor wasn't the end of Danny's misdemeanors. To further his crime spree Danny next assaults a robot guarding a stage door. That gets Danny backstage as Freddie the Fantastic is performing his magic act. Danny ruins Freddie's magic tricks and causes Freddie to lose confidence and become depressed. Judy can't cheer Freddie up so she decides to go with Danny to the dance. Of course, being a creep, Danny was eavesdropping on their private conversation.

Later while getting ready for the dance parts of Danny's body start spontaneouly becoming invisible and reappearing. It turns out the shady Molex salesman was honest about there being side effects. At the dance Judy and Danny's family assume that Danny is pulling a prank when parts of him start disappearing. Who can blame them? Ripping off Back to the Future isn't cool unless your name is Justin Roiland. 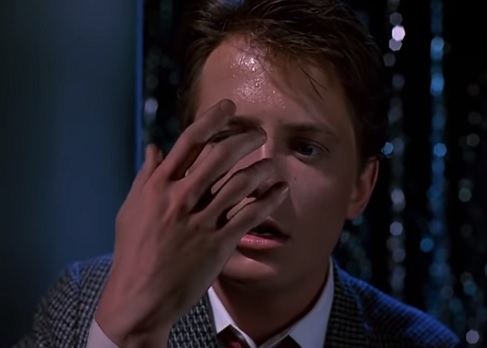 Photo Source: Back to the Future

Later at home the family finally realizes something really is wrong with Danny. Freddie and Judy show up and Freddie reveals he has figured out Danny sabotaged his act using a Molex.

Wait a miunte...Danny's body was coming apart as one of the side effects. At the beginning of the episode Freddie had Judy as a magician's assistant split in half and put her back together. Oh, I see...I get how that magic trick worked.