Is a beloved 1964 American sitcom really about the aftermath of a failed drug deal? This is one of my favorite fan theories because it makes far too much sense.

The person who first came up with this fan theory is unknown and the theory has been circulating since at least the early internet days of dial-up bulletin board services.

The fan theory seeks to explain why so much luggage, clothes and money are brought on "a three hour tour". The basic idea is that Thurston Howell III (Jim Backus) was planning on making a drug deal at sea when the weather started getting rough...you know the rest. The extra luggage and clothes were in case the Coast Guard started pursuing them and they would have to flee to South America. 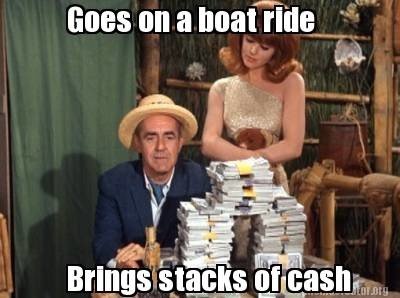 Thurston Howell III rented a pathetic vessel compared to what he could easily afford manned by two ex-navy vets Gilligan and Jonas (Bob Denver, Alan Hale Jr.) who could be bought off. Ginger (Tina Louise) provided the Hollywood drug connections. "The Professor" (Russell Johnson) was brought along because his scientific knowledge could be utilized to verify the authenticity of the drugs being bought.

The fan theory in the link above contends that Mary Anne (Dawn Wells) was a drug enforcement agent. I don't really think that is the case. My spin on the fan theory is that Thurston Howell III rigged the Hawaiian vacation contest so Mary Anne would win it. I propose that "Kansas farm girl" translates to "hemp growing queen".

Why am I so confident Mary Anne isn't with the DEA? Well, in the real world the character's actress was allegedly caught in possession of marijuana and arrested by a law enforcement deputy in late 2007.

"O.K. Holovision. But is there any on-screen evidence for this fan theory?"

Let's go to the fourth episode of season one, "Goodnight Sweet Skipper". In this episode the Skipper begins reliving a World War II experience while sleepwalking which involves converting a radio receiver into a transmitter. Due to the magic of plot device a woman is flying around nearby and turning their shortwave radio into a transmitter would allow the castaways to signal for help and rescue off the island. Yes, in any other story the Professor could easily do that but this time he can't. Just go with it.

The Skipper can't remember the conversion procedure while awake and the attempts to get the Skipper to fall asleep fail. The Professor suggests Gilligan should go and ask Mr. Howell if he has any tranquilizers. Gilligan asks Mr. Howell if he has any and if he could borrow some. Mr. Howell sends his wife (Natalie Schafer) to go to their hut for his "pill case" and she returns with a large suitcase. When the suitcase is opened it is full of bottles of prescription pills with stacks of money on top. "Oh, how did these get in here," Mr. Howell says and hands his wife the stacks of money. 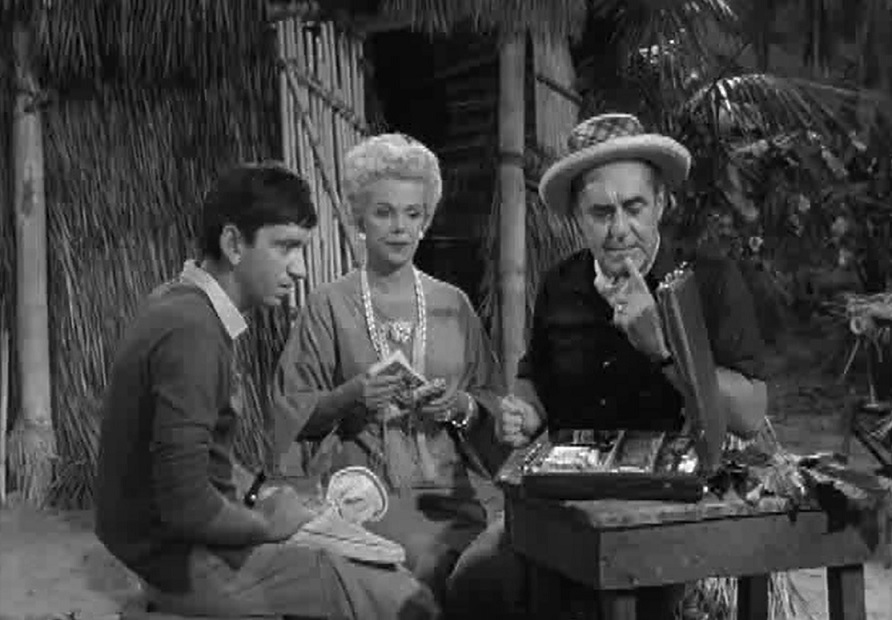 Even before the current age of asset forfeiture and opioid crisis that would look bad in front of a jury.

And don't get me started about the castaways popping those sunflower seeds giving them telepathic abilities in the second season.