In a previous blog post certain claims were made that if true makes me the kind of person who would exploit someone who has been through a bad situation for cryptocurrency gain. Sssoooo....

Hey, robots! Everybody loves robots. Have you ever built a robot? It may seem like an expensive hobby to get into because it often is. There is a type of robot that can be built relatively cheaply but comparably perform in some areas just as well as a robotic project based on an Arduino microcontroller board or Raspberry Pi. Even better it is a type of robot that doesn't require programming so you don't have to deal with Arduino sketches or GPIO pins.

BEAM (Biology, Electronics, Aesthetics and Mechanics) robots are traditionally built from used electronic junk with the goal of using the least number of electronic components possible. Most often the source of a BEAM robot's power is solar but a battery or two can work just as well. More advanced BEAM bots use the logic gates of integrated circuits.

BEAM bots are based primarily on analog circuitry. What does analog mean? Since I am writing this as an introduction rather than a tutorial; digital is discrete in value while analog is continuous. When something is digital two states are possible. A switch is on or off. A voltage is high or low. A zero or one. Analog can be any value such as 0.11, 2.0, -2.23467, ect.  Electronic circuits can be made to convert between analog and digital. Digital signals can be modulated in pulses for an analog output.

Of course being electronics some basic knowledge is required and the DC current of a BEAM bot under certain circumstances can cause painful shock if not handled properly. Beginners should follow step-by-step instructions of a BEAM bot project and not substitute different components.

So, what makes BEAM special? The simple electronics can allow a BEAM bot to mimic the behavior of a biological organism. Remember in biology class all that talk about action potentials and thresholds causing neurons to fire a signal? BEAM bots also have an electronic kind of neuron system. In its simplest form as diagrammed below a capacitor has one lead for an input while the capacitor's other lead is connected to an inverter's input and pulled to ground via resistive load. 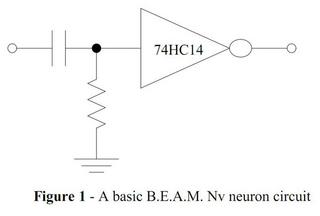 As shown in the YouTube video below starting around 1:22 the RC time constant can be set by the resistor being used. The larger the ohmic value of the load the longer it takes the capacitor (BEAM neuron) to discharge into the inverter's input (fire a signal).

The Wikipedia entry for BEAM robotics includes "hybrid" BEAM robots that use both analog sensor networks and microcontrollers to get the benefits of both digital and analog. To me that isn't canonically a BEAM bot. In my opinion if one must use a microcontroller or microprocessor it should be independent of the BEAM robot's response and behavior. I would find a case such as using an Arduino UNO for data logging acceptable. I am interested though to see how BEAM hobbyists will use neuromorphic technology now that the University of Michigan has created a programmable computer built of memristors.