A few days ago I created a meme post. In the post I admitted it was a little out of context. Based on the laws of where I live it had to be. Since the meme was based on a private Discord conversation I had to use the bare minimum to make a free speech point and redact the identifiers. There are exceptions to the laws such as when life(lives) might be at risk or if it contradicts public policy. None of those exemptions were in play though so I just made the meme and moved on other than to reply to a little confusion expressed to the meme's meaning.

Today that individual(@schlees) has replied and made his or her identity publicly known as the other party. Based on my understanding of the laws where I live @schlees has forfeit any claims of privacy violation or such actions.

I believe this now entitles me to post the unredacted private discussion that occurred on Discord.

All of the following images are sourced from discord.com. A limited amount of my commentary on this conversation follows after. 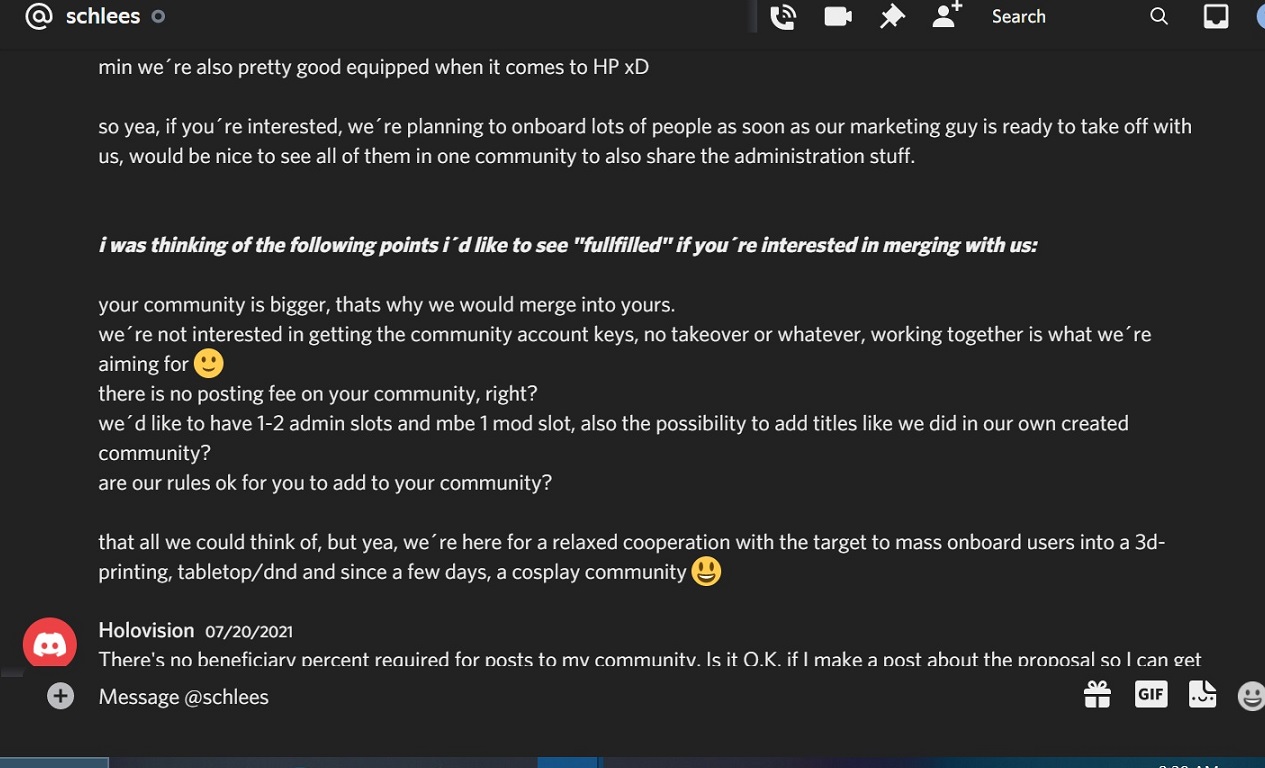 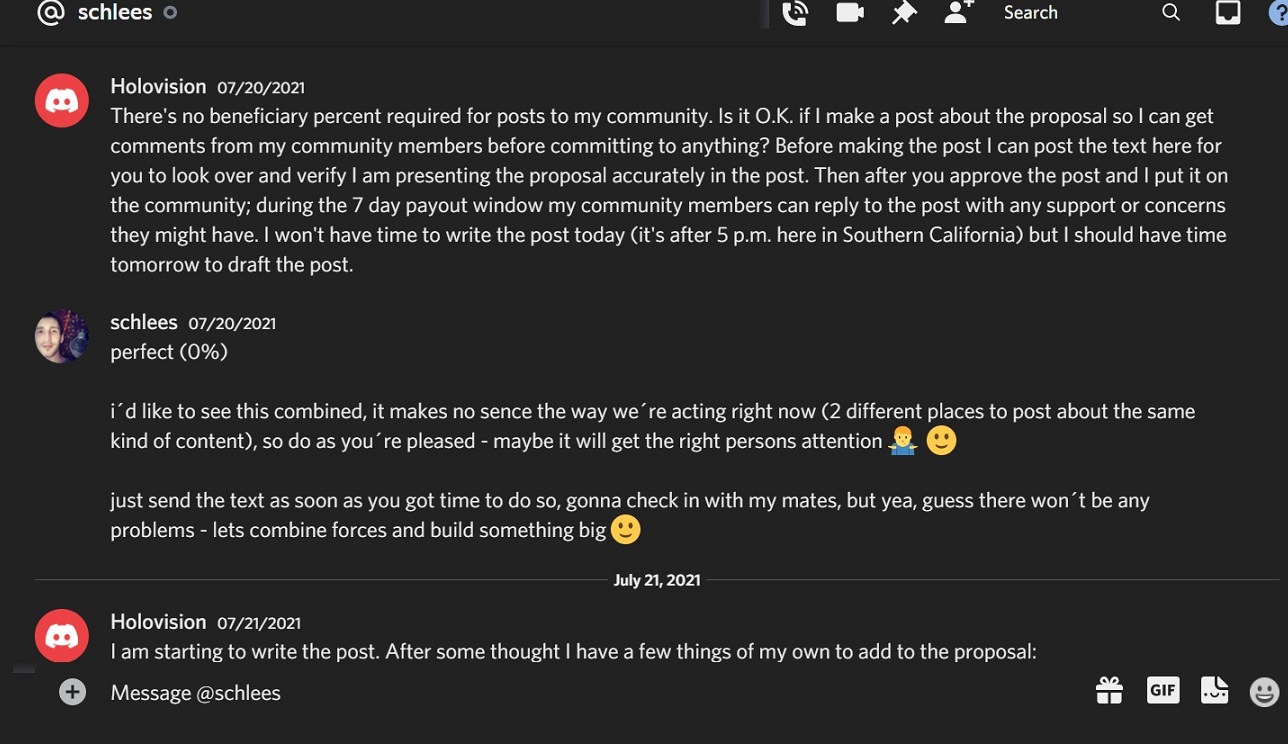 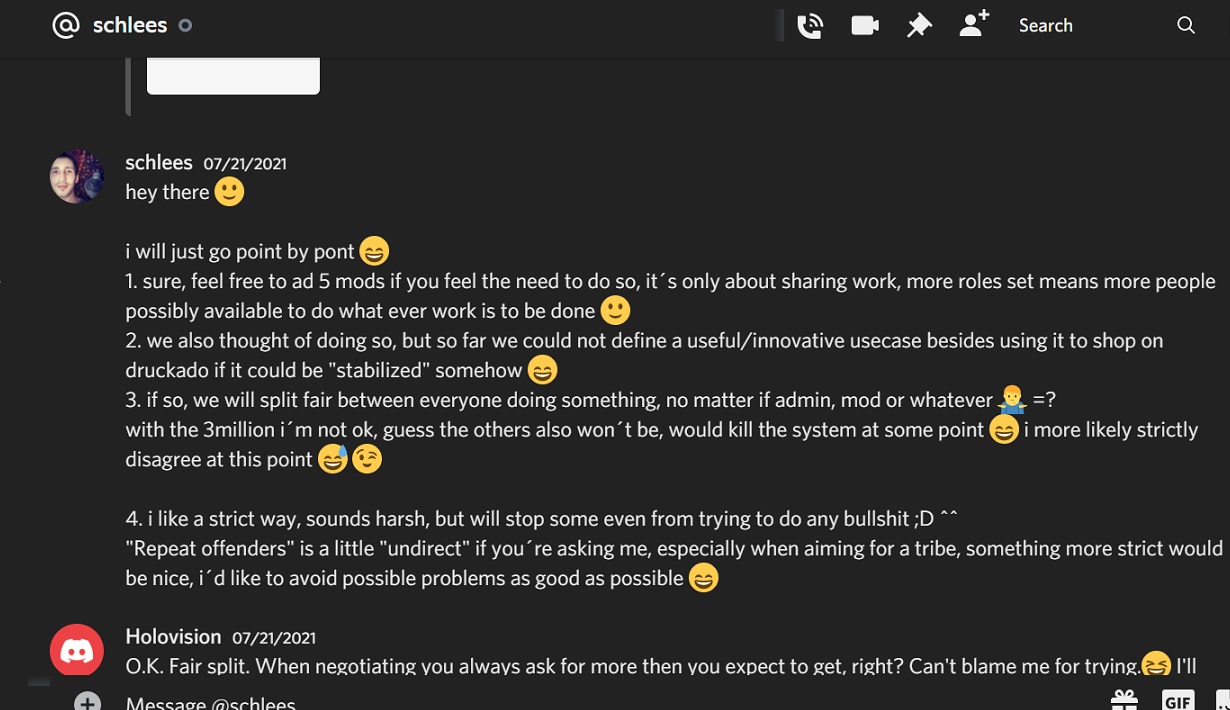 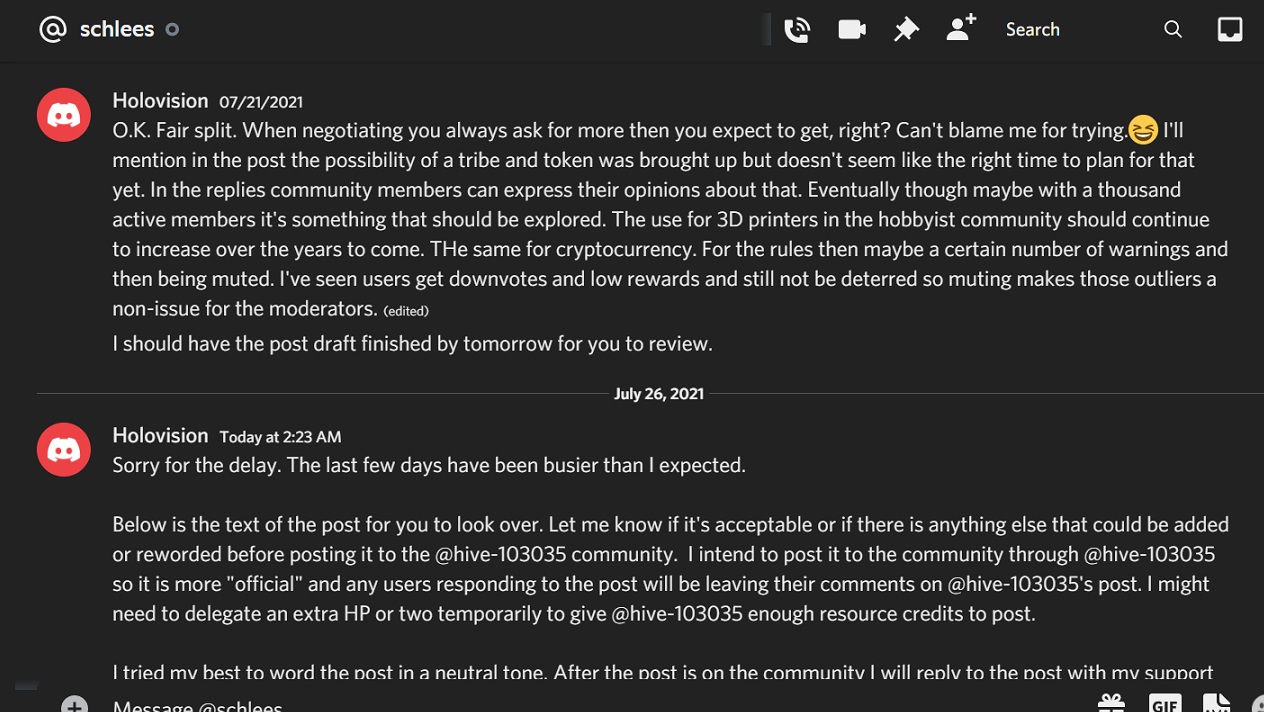 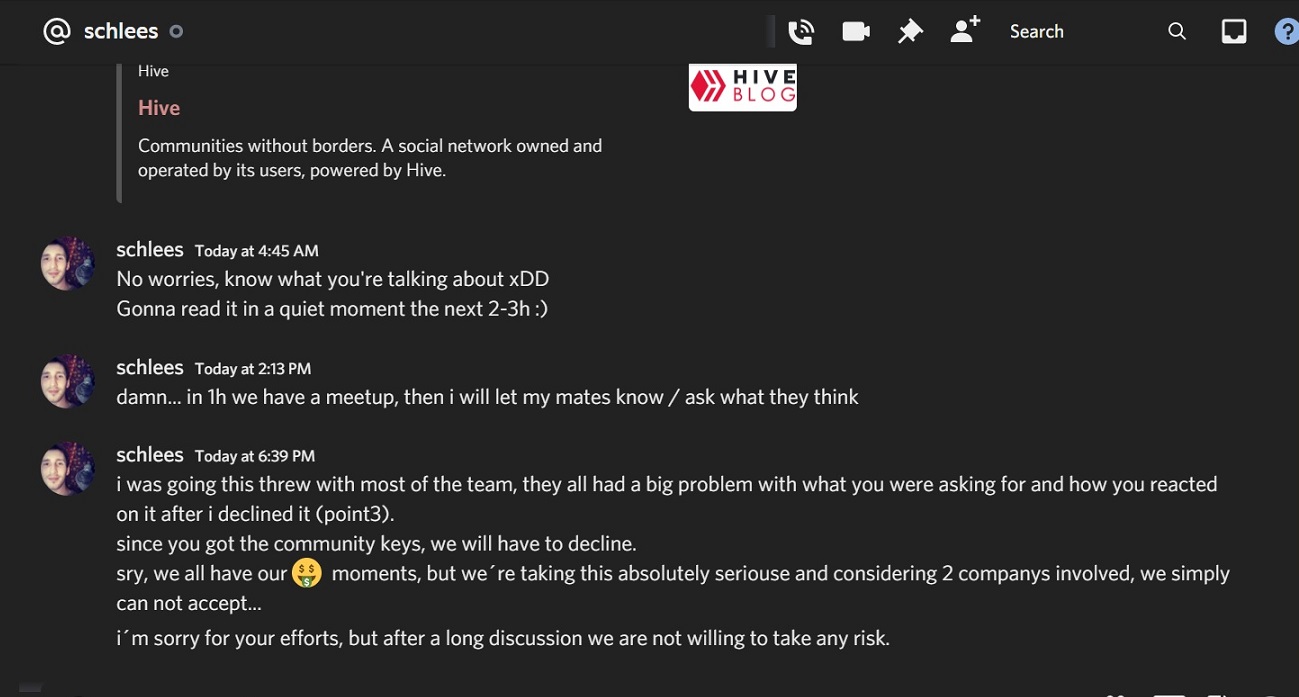 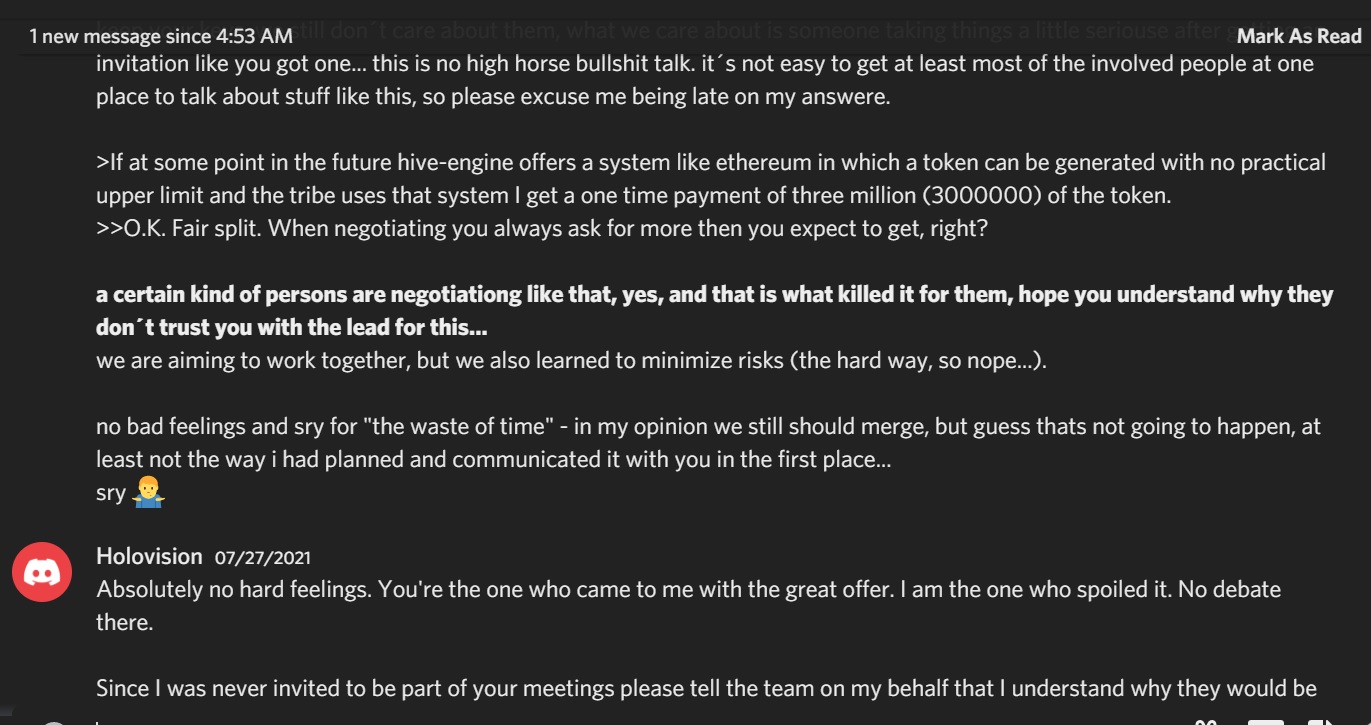 In the heat of the moment I misread the part about community keys and realize now what @schlees meant but that really doesn't matter overall in the issue. The rest of the discussion I will let speak for itself.

I know what kind of person I am. I am an unapologetic capitalist but I don't define that as "greedy". I know capitalism isn't perfect. I've become more aware of the many flaws in the system during the global pandemic but until we get to a post-scarcity Star Trek utopia capitalism is the best economic system we've got and each individual should fend for themselves in that system.

I know it would be a waste of both my time and energy to convince @schlees otherwise so I won't even make the attempt.

@schlees has made a few publicly viewable replies on the Hive platform to posts since the conversation. I will post screen captures below. Rather than replying to each one this text between the Discord conversation and @schlees' replies will be my overall reply to those replies from @schlees.

Let's say for the sake of argument @schlees is 100% correct about me. I am a "greedy idiot" and can't be trusted. Based on @schlees' replies below combining the two 3D communities would become a combination of a community run by at least one greedy idiot and one vindictive idiot. Eventually others on the Hive platform would figure out that was happening and a new second 3D printing community would be started that wasn't pure evil.

@schlees came to me with the premise that it would be better to have one 3D printing community. At first I thought that premise was sound but now I have come to realize that premise was flawed.

Piecing together the black box which is the full unredacted Discord conversation and my limited knowledge this is what I would conclude:

@schlees came to me with a proposal to cooperatively join the two 3D printing communities. I thought it was a good idea and was willing to cooperate.

So far so good.

The proposal was mulled over. I was in support of it but I wanted to make sure nobody in my 3D community would be opposed to the idea.

So far so good.

I wrote an outline of the proposal discussed that I believed would favor both sides but gave myself and my side a little extra so I could have room negotiating down since I don't have an equal leverage to start with.

@schlees read it over and responded it was mostly good but negotiated my offer down to a fair split.

So far still good. @schlees had my support at the time and I had the psychological affect that even though I didn't have as much leverage I was being respected and treated as an equal in the possible deal. Just the way negotiations and diplomacy should function.

@schlees received my outline, read it over and then presented it to "the team".

This is where it went south as far as I can tell.

I hypothesize that "the team" including @schlees is at minimum @nbs.gmbh, @satren and @druckado based on the leadership of the 3D printing community @schlees represents. I presume based on my limited knowledge that @druckado is one of the two companies @schlees referred to or is a company dealing with two other potential companies in the plan to onboard that @schlees described in the conversation.

I assume at least one of the aforementioned team members or an additional team member said something along the lines of, "What do you mean he negotiated an equal share? We have this huge plan! Why is he in any way equal to us?" Possibly @schlees was directed to then weaponize my willingness to negotiate against me as a plausible excuse to save face and maybe discredit me in case those one or two companies mentioned wanted there to only be one 3D printing community on Hive as part of some deal's conditions.

Like stated earlier I am an unapologetic capitalist in a system in which each should fend for themselves. I walked into the negotiation with @schlees feeling it would be positive but left feeling like I dodged a bullet. Whatever happens in the negotiations between "the team" and those companies isn't my problem.

If anyone wants to reply to this post to support me thank you but I would strongly recommend not to based on how vindictive @schlees seems to be based on the replies below. If you want to reply that I am a greedy idiot and a bastard or whatever then yay free speech, @schlees will probably upvote your reply, and great point I might be and not know it but those great points really don't amount to anything useful.

I hope you enjoy your Pyrrhic victory @schlees. Embrace it. Love it. You earned it. You won and now it's over. 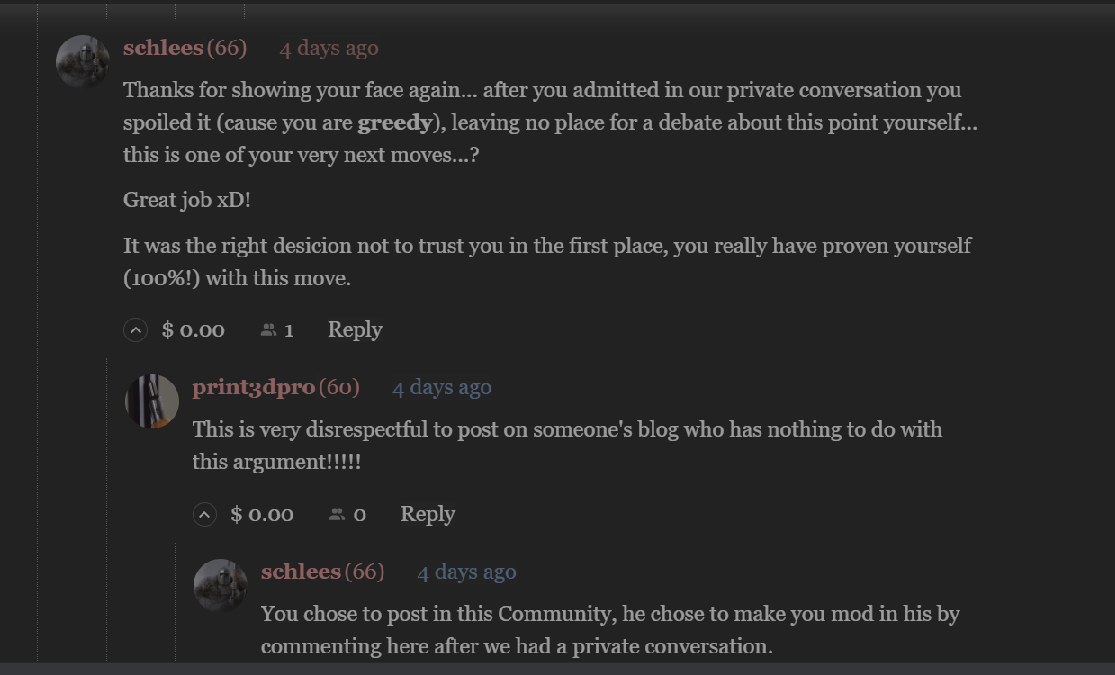 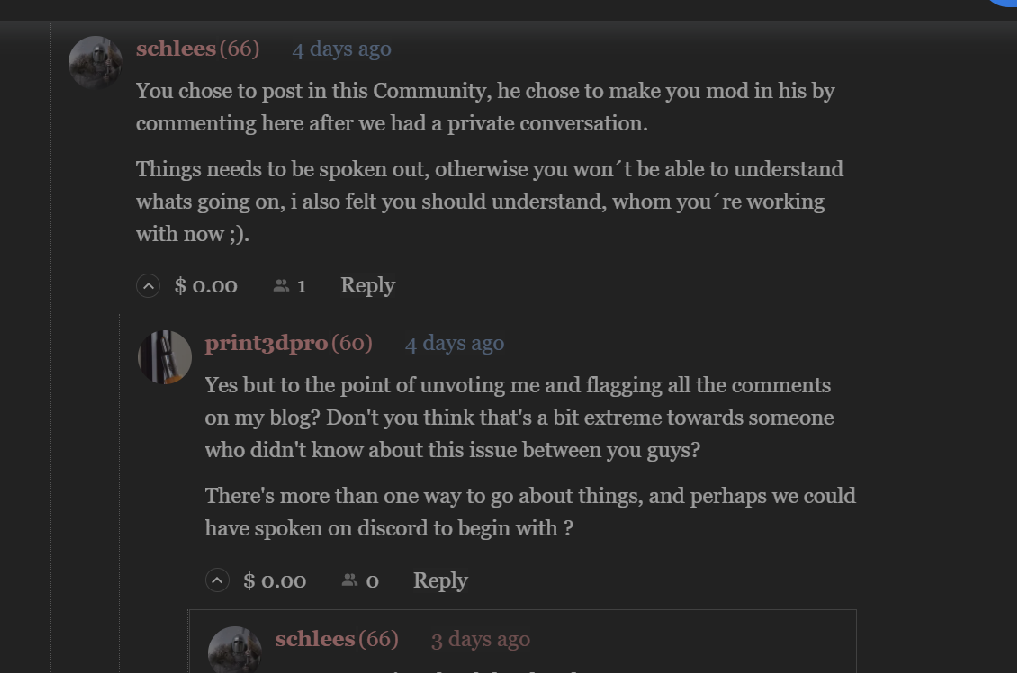 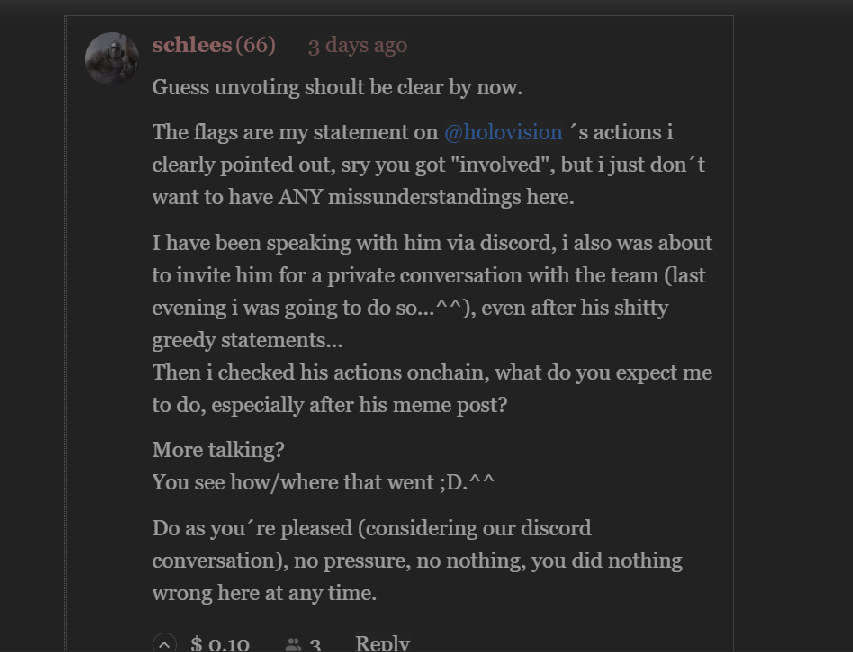