Albert Einstein and His Chauffeur (Joke)

One day Albert Einstein was on his way to a science conference to make a speech; being driven there by his trusted chauffeur of several years.

On the way to the conference Einstein remarked out loud how the chauffeur's white hair and mustache made him look a bit like Albert Einstein. As the ride continued for a few more minutes Einstein said, "I'm sick of all these conferences. I always say the same things over and over!"

The chauffeur agreed. "You're right. As your chauffeur I have attended all of them and even though I don't know anything about physics I could give the conference in your place."

So they switch clothes and as soon as they arrived the chauffeur dressed as Albert Einstein went on stage and started giving the usual speech while the real Einstein, dressed as the chauffeur, sat in the back of the audience.

In the crowded auditorium there was one scientist who wanted to impress everyone and thought of a very difficult question to ask Einstein, hoping Einstein wouldn't be able to answer it. The scientist stood up and interrupted the conference by posing his very difficult question. The whole room went silent, holding their breath, waiting for the response from the world famous genius.

The chauffeur impersonating Albert Einstein looked at the scientist dead in the eye.

"Sir, your question is so simple that I am going to let my chauffeur answer it." 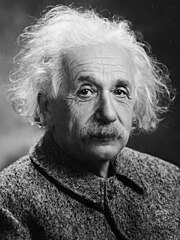