First, thank you @davidlionfish for taking my suggestion and changing the community's description so derivative subgenres of cyberpunk are also allowed here.

Teslapunk used to be on Wikipedia's list of cyberpunk derivatives. This is how it was originally described in the entry:

Teslapunk, named for scientist and inventor Nikola Tesla, refers to fictional narratives or visual styles inspired by 18th, 19th, and early 20th century pioneers of electricity and electrical devices. Like other steampunk derivatives, these narratives or styles commonly imagine an alternate history where, in the case of Teslapunk, widely available cheap (or free), clean, and often highly portable electrical energy replaces all previous energy sources (such as wood, coal and oil, and the steam engines that were fueled by them), but has yet to be replaced (or is never replaced) by other energy sources itself (such as diesel or atomic power). In some Teslapunk stories, free-energy technologies are largely forgotten in the present day, but only because they were kept secret by some government or other organization that used the technologies to control the masses. (Or to protect the masses, as is the case with Warehouse 13.)

Visually, Teslapunk shares much in common with Raygun Gothic.

Looking at the Talk section of the entry the main reason Teslapunk was removed was due to there not being enough examples of Teslapunk in popular media to justify Teslapunk's inclusion on the list.

Somehow though "nowpunk" has remained on this list for years relatively untouched even though that -punk style is based artificially on "all contemporary fiction" with connections so tenuous it makes the Tommy Westphall Universe look tame by comparison.

Clearly the real reason Wikipedia has suppressed Teslapunk is Big Oil. Probably not really but 'cause Teslapunk it's a fact that's why. The scenario of Teslapunk being suppressed by the energy industry may make life seem more interesting but there is also the call to adventure in the hero's journey to fight back and spread Teslapunk to the world.

I think the main reason Teslapunk isn't currently as predominant in pop culture as cyberpunk or steampunk is the aesthetics aren't as well defined. The description quoted above from Wikipedia gives the basic skeleton that a divergence in history is more favorable to Nikola Tesla and humanity accelerates faster along the Kardashev scale. What might be lacking is the meat and tissue of what music, fashion, ect. wraps around the bone structure.

I've been thinking about this for a few years and over that time I've come up with some ideas I'll be proposing in future posts. Hopefully with the collaboration of other content contributors we can all help bring new life into this cyberpunk subgenre. 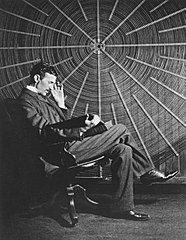